Where Do These Weird Ideas Come From? (Part One)

People often ask me where the ideas come from for my novels. Some days they just seem to drop into my lap. I usually have more plot ideas than I will ever be able to use.


For example, take the plot for my first published novel, The Dark Lady.


I was watching TV one night, or I might have just been passing through the room, when I noticed a head and shoulders shot of an actress. The first thing that popped into my head was: she would be an excellent choice to play the part of an evil queen. That generated another random thought: I wonder how evil queens get their bad reputations. This was before Wicked.


Naturally I started kicking around ideas. On my daily morning walks before breakfast I had already dreamed up a setting that I might use someday and one that would be suitable for any number of situations, a grim ancient castle that was the seat of a once-mighty empire. It was built on an island in the center of a lake. That sounded an excellent location for this project.


I started off with the idea of let’s have a young girl who wakes up one morning to find her parents dead and everyone wants to control her and the kingdom. Before I got too far into the story I was thinking of another somewhat parallel situation, that of the young Queen Elizabeth the First and how she was surrounded by plotting nobles and how she had to struggle, and be quick-witted in order to survive. I think that changed the direction of the story slightly.


Although I liked the background idea of the evil queen theme, that became more of a secondary feature. Eventually my heroine might not be all that evil; however that was how some people, including her grasping neighbors, saw her. Some of that was also defensive propaganda and I made her headstrong with a bit of a temper to fortify her reputation.


Once I became familiar with the heroine and the main characters surrounding her I had enough on which to build my tale. When we decided to turn The Dark Lady into a trilogy I had a firm base on which to continue: my heroine was still young, while things had stabilized somewhat she was constantly in peril, and that gave me the basis for the next two books, Dark Days and Dark Knights. By the end she was old enough for me to add more than a hint of romance to the mix.


Am I satisfied with how it turned out? Yes. While I drifted a bit from my original question, my main character still retained enough backbone and determination that if those around her were not careful she could still turn out someday to be an evil queen, or a dark lady, whatever that might be.
One of the main reasons I write is to find out how the story will end. Sometimes even I’m surprised. 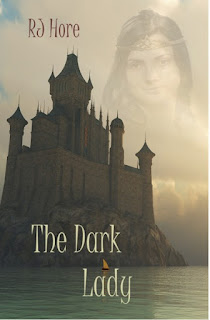 Posted by Unknown at 1:00 AM No comments: